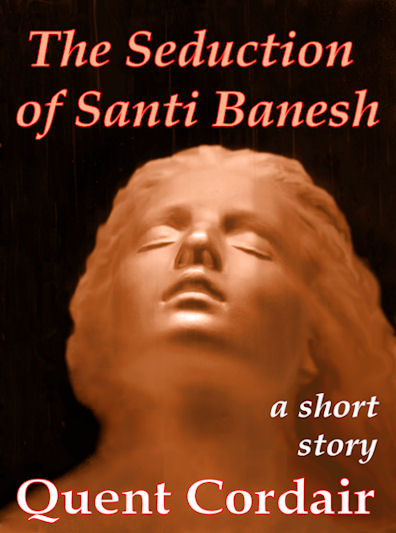 “Santi Banesh was a sultan’s dream of dark olive skin and burnt-umber eyes, deep almond pools that could drown a man. The long loose folds of her traditional wrap tried to hide her body, but her enchanting eyes, slender hands, the rise and fall of her chest and her graceful, sensual walk only made the robe work contrary to its intention, its overt defenses posing a rude challenge to imaginations which proceeded to lay waste to its veiling walls. Imaginations can be thorough beasts: Santi had already been ravaged by hundreds of men, though she was still a virgin and only fifteen.

“And now, just as her body was straining for perfection, it was starving. A third day without food and it was screaming. Everyone had said that after two days the hunger pangs abated, and for most girls they probably did, but her insides had set up a protest which had started about an hour before the first missed meal and had only escalated since. She had always been a healthy eater anyway. Her mother scolded that she would turn into an elephant once she bore children. But Santi’s body burned more brightly and hotly than most—it needed the food—and it found this deprivation unforgivable. . . .”

While traveling with her family to New York, the daughter of a third-world diplomat makes a life-altering decision during a layover in San Francisco. A favorite among Cordair fans, this short story was first published in the 1994 summer issue of the Atlantean Press Review.