. . . The movie was about a woman whose mission it was to find a cunning enemy agent, to seduce him and to kill him. There was little known about the man, not even his name. Armed only with a blurred photograph, a small handgun and her determination, she tracked and pursued him all over the world, always coming within just a few moments or a few steps of seeing him. As she learned his every habit and motivation, she became increasingly captivated, and driven as much by a need to see his face as by the necessity of completing her task. Finally, she followed him into a remote desert, certain that he wouldn’t be able to elude her there – but she became hopelessly lost. Overcome by exhaustion and the burning heat, she fell to the sand.

Lifting her eyes, she saw him on the crest of the dune above her, traced against the white desert sky. Pulling herself to her knees, she drew the gun and aimed . . . but her hands began to shake. She wiped a tear away with her sleeve.

When she looked again, he was still standing there. Dropping the gun, she struggled to her feet and stumbled up the dune toward the shimmering figure – but the mirage disappeared. She fell again. Taking the picture from her pocket, she kissed it and whispered, “Maybe you were only a dream – but I loved you.” Her hand, still holding the picture, fell, and the blowing sand began to cover her body.

The lines of the closing scene were burned into Garrett’s memory. He knew every word by heart.

“It’s a good thing you fired your gun – ” the man’s voice was deep velvet with an Italian accent – “I never would have known you were here. But, tell me, what is such an extraordinary and beautiful woman doing alone in the desert?”

“I’m afraid I was trying to kill you.”

“Oh, now that is a very serious crime.” His laughing eyes betrayed the stern expression on his face. “You should be severely punished. What should I do to you?”

“You should torture me, or kill me, or abandon me here to die . . . but whatever you do, please don’t kiss me.”

He stopped walking, looked long into her eyes, and with the sand swirling at his feet, he kissed her. . . . 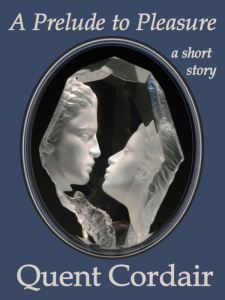 . . . the above is an excerpt from
“A Prelude to Pleasure”

How does a man find the woman of his dreams?

“Before the five-year search there had been fifteen long years of watching and waiting to fall passionately in love the way he had always believed he would, the way he once thought he had. But on his fortieth birthday, he stood alone on a rock above a restless ocean and cried. There was no one with whom to share his world, and there seemed to be nothing he could do about it. In business he could do anything, achieve anything, he refused to accept failure—but he couldn’t create a woman, and he couldn’t fall in love with one who simply wasn’t there. Lifting his head, he had angrily wiped away the tears: he had been more than patient with the world, and the world hadn’t delivered on its promise. And if he couldn’t have what he wanted—he swore he would get the best that could be had…”

“A Prelude to Pleasure” is the story of a man of accomplishment and wealth trying to a true love—and what he discovers along the way, with the help of a boy who reminds him of who he once was. First published to acclaim by The Atlantean Press in 1991. 30 pages. 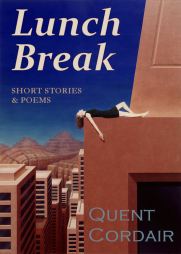 “A Prelude to Pleasure” is also available in the
LUNCH BREAK collection of short stories and poems,
now available in paperback ($7.95) and Kindle ($3.99) editions. 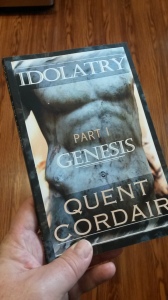 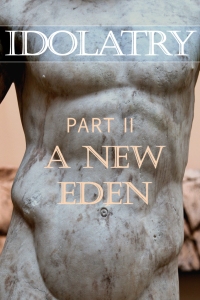 Chapter 13 of A NEW EDEN, Part II of IDOLATRY, is now available for those on my “Let Me Know” mailing list.

Thank you for reading and for all your wonderful Amazon reviews! My fans help keep me fueled.