Where on earth, when in history, has it been heard before, just so? Today’s sound bite isn’t new. It’s an echo from a hundred years ago, generated from the same source, the cause and implications recognizable to those who have studied early 20th-century history from an ideological perspective, particularly the history of the Weimar Republic:

“What socialism was to the leftists, nationalism was to the conservatives: it was their ideology, their political ideal, their common bond. … The conservatives did not attempt to prove the inherent superiority of all things German. They felt it, and that was enough for them. The German soul … what it cherishes is duty, and self-sacrifice … Most conservatives were religious men, who regarded their basic ideas as in a Christian approach to life. Typically, the public statements of these men dwelt on the such themes as the value of faith, the evil of atheism, the importance of church and family, and the need of religious schools to guide the young and immunize them against radicalism….”

“The deadliest enemy of the country, the conservatives declared, is socialism….”

“The German Republic was an experiment in political freedom combined with economic authoritarianism and defended by reference to the ethics of altruism. The country’s republicans did not wish to choose between freedom and altruism. They thought that they could have both….”

“…the Communists proceeded to act as the people’s vanguard: the party staged a nationwide campaign of violence designed to precipitate a civil war and overthrow the Republic….”

“Ideologically, the clash between the Communists and the Free Corps was a clash between champions of the all-powerful state and seekers after an all-powerful leader; between activists eager for an unselfish (socialist) Germany and activists eager for an “idealistic” (non-capitalist) Fatherland… Wherever the German turned—to the left, to the right, to the center; to the decorous voices in parliament or to the gutters running with blood—he heard the same *fundamental* ideas. They were the same in politics, the same in ethics, the same in epistemology.”

“This is how philosophy shapes the destiny of nations….” 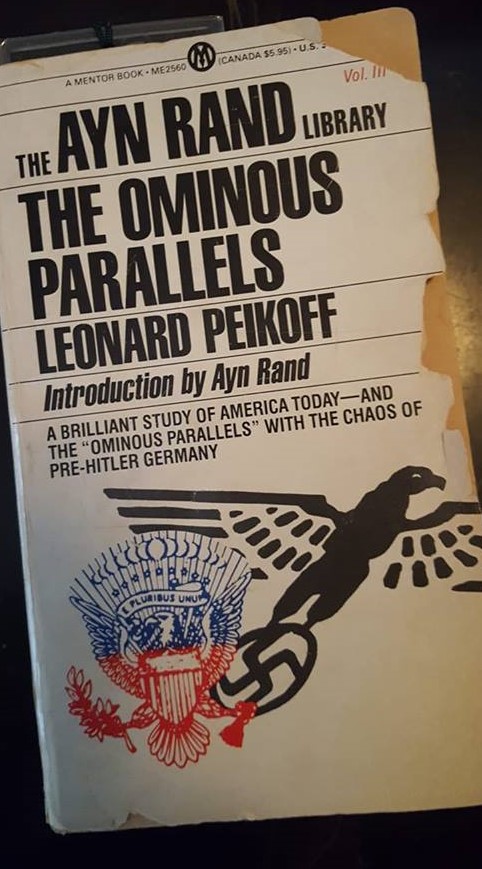 The Ominous Parallels is available on Amazon… ~ https://www.amazon.com/Ominous-Parallels-End-Freedom-America/dp/081282850X

Check out my Q & A with The Fussy Librarian ~ ~  https://www.thefussylibrarian.com/newswire/for-readers/2018/06/22/author-qa-quent-cordair